We looked at hundreds of studies to find out. An independent review of 151 studies highlights key areas where FAIRTRADE drives benefits for farmers and workers, and where more is needed. 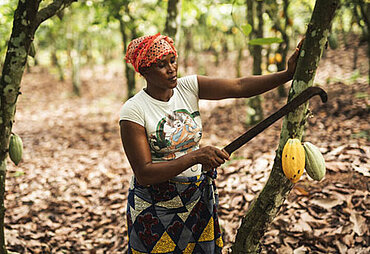 Today, FAIRTRADE represents more than 1.9 million farmers and workers in 71 countries around the world.

But what do we know about the impact FAIRTRADE is having in producers’ lives? And how do we assess whether what FAIRTRADE provides – things like guaranteed prices, the extra FAIRTRADE Premium, rules for workplace safety and gender equity, targeted programmes and much more – is leading to the intended benefits for farmers and workers?

That’s why we commissioned an independent review of recent studies (2015-2020) to gain a comprehensive picture of the extent and depth of our impact in the areas we aim to influence that ultimately drive benefits for farmers and workers.

Researchers reviewed 151 studies related to our theory of change, which underpins our work and shows the expected pathway from interventions through to impact. Based on the strength of positive evidence, the researchers assigned a traffic light score (green, amber, red) to each area, or grey to indicate areas of insufficient evidence. Nineteen out of 22 of the areas researched had sufficient evidence to rate, showing the depth of evidence already available. Of these 19 areas, 84 percent were rated as green (strong evidence that FAIRTRADE is making a difference) or yellow (evidence was mixed, or promising but based on a limited number of studies). Read the full report for all the detail.

We used the study to inform our new theory of change, and to guide strategic decisions. It’s also part of our commitment to transparency and learning.

Here are five highlights of what we learned, and what we’re taking forward in our 2025 global strategy.

1. FAIRTRADE is having positive impact in producers’ income, wellbeing and resilience.

This area – the most researched in the review with 63 studies investigating it – includes findings that overall show a positive effect on farmer household incomes, assets and benefits such as education and health services. Fairer prices and the investments made possible by the FAIRTRADE Premium are important factors in this area. In addition, other factors such as better trading conditions and greater food security for households contribute to farmers’ and workers’ wellbeing.

Where we’re going: We’re pushing further in our global strategy toward living incomes, as well as expanding markets so producers can sell more on FAIRTRADE terms.

Studies related to this area showed that at larger FAIRTRADE certified plantations, workers benefit from better physical spaces, paid overtime, adequate breaks, and health and safety protections. Contracts are also stronger in FAIRTRADE certified organizations, as are in-kind benefits such as education support.

In addition, elements that define ‘voice and dignity’ for workers – such as bargaining, representation, positive relationships, and workers’ rights – tend to be more prevalent in FAIRTRADE certified organizations.

Where we’re going: Accelerating progress toward living wages for workers is a priority in our global strategy, given the mixed findings about FAIRTRADE's effect on wages due to the influence of local regulatory environments. We have taken additional steps to improve wages for flower workers and banana workers, which we’ll continue to measure, refine and expand.

3. FAIRTRADE supports the development of strong and democratic producer organizations.

Democratic decision-making is central to farmers having a voice as members of their cooperatives, and therefore in building stronger trade relationships. The researchers found a strong body of evidence that FAIRTRADE producer organizations have better management, better systems and financial capacity than non-certified producers.

There is some positive evidence of FAIRTRADE's impact on democratic governance and collective action, but the researchers noted the size and maturity of farmer cooperatives is also an important factor.

Where we’re going: We will continue to focus attention in our global strategy on opportunities for women and gender equity. We acknowledge that while a majority of relevant studies showed some FAIRTRADE effect in increasing women's participation in their cooperatives, local social norms still influence deeper changes in gender relations. We’ve also added a greater focus on opportunities for young people to be successful farmers and cooperative leaders, including women.

The FAIRTRADE Standards contribute to environmentally friendly farming practices, such as use of natural fertilizers. Many FAIRTRADE  producers are also organic certified, which deepens the impact in this area. The review also found some encouraging findings on FAIRTRADE's contribution to environmental effects such as fresh water conservation and biodiversity, although more research is needed.

On the critical topic of climate change adaptation and resilience, studies are limited and more research is needed. An increasing number of certified producer organizations use FAIRTRADE financial benefits like the Premium to adapt to climate change, including conducting risk assessments, and implementing soil conservation and reforestation practices.

Where we’re going: Supporting producers to accelerate climate change adaptation is a major emphasis of our global strategy, including through partnerships and advocacy.

The review shows that FAIRTRADE hasn’t yet succeeded in making global trade systems outside of FAIRTRADE supply chains significantly fairer.

However, increased consumer awareness and trust are a positive evolution, as consumer demand is a critical factor to companies expanding and improving their sustainability commitments. When it comes to influencing business leaders and policy makers, there is progress in raising fair and sustainably trade as a priority, and also more to be done.

Where we’re going: FAIRTRADE alone can’t solve the challenges facing farmers and workers today – companies, governments and shoppers all play important roles in making fair trade the norm rather than the exception. Advocacy and partnerships are important in our global strategy, particularly in the areas of living incomes and wages, and human rights and environmental due diligence.

The world has changed significantly in the past few years, from the global pandemic to climate change effects to sustainability legislation developing in the European Union. We’ll have more to share throughout the year about different aspects of FAIRTRADE's impact, and especially how farmers and workers are faring in these challenging times. If you have a question, we want to hear from you at impact@fairtrade.net.